Several public transports operate from the airport to downtown, here below we detail several options:

First option: Aerobus Barcelona / From the airport to the center of Barcelona (Catalunya Square)

The Airbus service is available every day of the year, always with the same hours and the average journey time is 35 minutes.

Tickets can be purchased on the bus and are paid in cash, if you pay by credit card can buy them in vending machines at the airport or through the following online service detailed below.

The Aerobus is adapted for disabled people.

Travel by taxi is the most comfortable mean of transport but also the most expensive. The price from the airport to the city center costs between 30 and 40 euros and the journey time is around 20-40 minutes depending on which terminal you leave and the part of the city you go to.

Taxis from the airport of Barcelona offer their services 24 hours 365 days a year and you will find them in some stops at the T1 terminal located in the arrivals roadway (P0), and at the terminal T2 in front of each output of the T2A, T2B and T2C outputs.

The taxis can be quickly distinguished by their yellow and black colors.

Indicative panels on all airport terminals will indicate the direction to follow towards the taxi areas.

Be aware of the oficial prices for the year 2017 by checking the taxi oficial rates.

Third option: TRAIN-RENFE (travel by train from the airport to Barcelona)

Depending on which area of ​​Barcelona you want to go, the train may be the best option for its cost, because it is not affected by the traffic, because of its various stops in Barcelona (Sants station, Passeig de Gracia station and Clot station), all stations are connected to the metro network which is the fastest mean of transport from which you can move to all areas of Barcelona.

From the airport to the center of Barcelona

The train station is located in terminal T2, if you land on the T1 terminal you will have to take a free shuttle bus that links both terminals. There are several panels that will indicate the way to reach the train station. The train frequency is every 30 minutes from 06.00 am to 23.00 pm.

1) We recommend you to buy the T-10 ticket which includes 10 trips that can be used in public transports in the city of Barcelona for bus and metro. It is valid for 10 journeys, it can be used by different people and the cost is 9.95 euros.

2) Sants and Passeig de Gracia stations are the most central and you will find several metro lines to travel anywhere in the city.

Fourth option: Night bus N17 (How to shift at night from the airport to Barcelona)

The night bus line N17 makes the trip from the airport to Barcelona. The journey is long because it makes several stops in villages near the city but the time is around 30 minutes, about the same as the Airbus because at night there is no traffic. The stops in the center of Barcelona are located in Ronda Universitat and Catalunya Square.

The price is 2.15 euros for a single ticket.

The N17 bus stop is located behind the taxi station of Terminal 2. 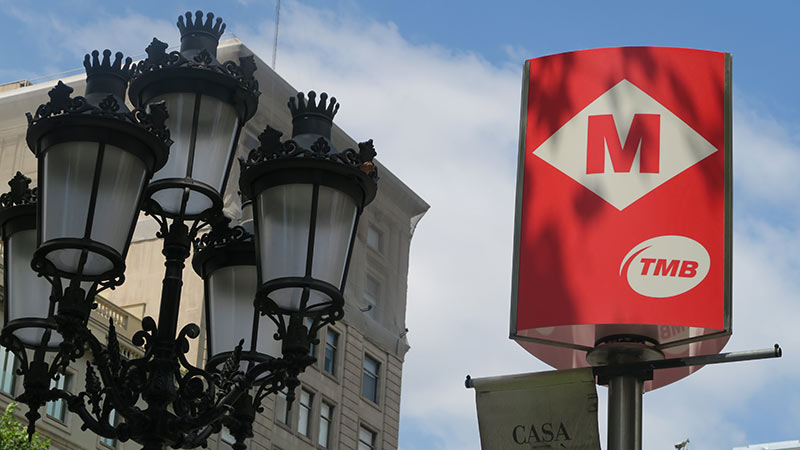 It’s now posible to reach directly the city center by metro from the airport. Check my last post about the metro from barcelona airport to city.

About the Author: Frederic Echivard